You are here: Home / Deep Web News / A Dark Web Site does a Bitcoin Fundraiser for Trump & Pence assassination could be a scam
Share11
Pin

According to the news posted recently on many websites and which is spreading like a fire widely. A Dark Website is accepting bitcoins to raise a fund for assassinating the recent President-elect Donald Trump & Vice President – Elect Mike Pence. Here is the Transcript of the message posted on the dark website.

“As you are all well aware, the consequences of having Donald Trump and Mike Pence as the leaders of the free world is extremely dangerous. The political, environmental and social consequences will change the United States for the worst. The only fact the rise of several white supremacist movements like the KKK and the neo-nazis trying to eliminate other americans of different origins cannot be tolerated. We, as a society have come too far to go back to this.

We are part of a well-known underground organization that always defended and protected the rights of all people against crooked governments and regimes using different cyber attacks, but now, we have to go further as it will require much more than cyber attack to defend ourselves to avoid civil war or another world war.

We have several assets in different branches of government, security and even some working in secret services. Unfortunately, the plan we need to implement requires a lot of money to pay for equipment, bribes and also to pay those assets. If you are like us and wish to see our plan succeed for our society’s, children’s and planet’s sake, you can donate anonymously using the following Bitcoin address.” 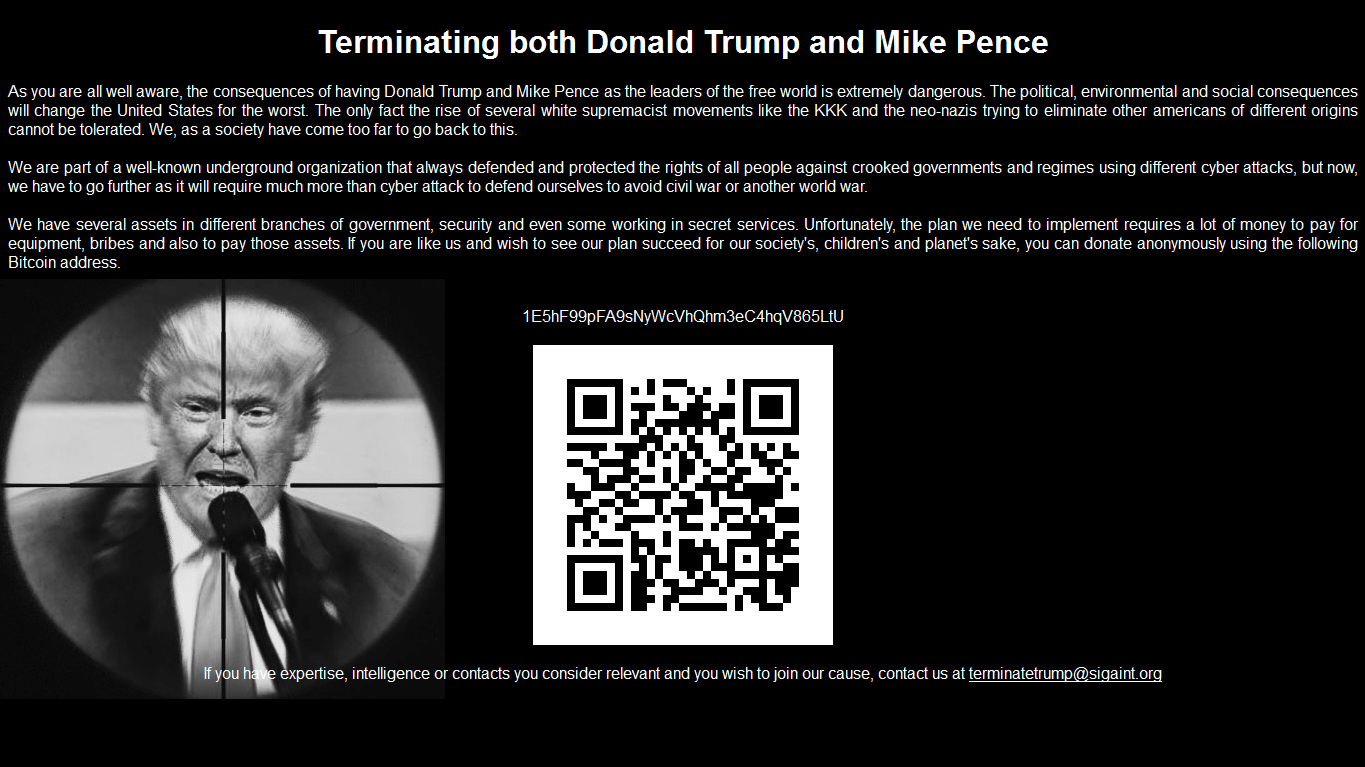 We were able to uncover in the source code about a message that this could be a scam.

This site is being hosted by the Canadian citizen Morand, Julien (Lastname, Firstname).
He once worked for a Canadian Best Buy’s Geek Squad.
However, I thought that I had saved some information about him on my storage systems, but I can’t find them anymore.
His name, citizenship and former position are from my memory, but absolutely correct.

He’s actually just a little scammer, but now he’s calling to murder the president-elect.
I don’t see how anyone could sit back and watch someone doing that.

I actually planned to send an email to the United States Secret Service about him, but I can’t find an appropriate email address of the USSS, so I’ve to post this here.
Please forward this message to the appropriate public authorities at your convenience.

Have a great day!

Edit: My bad, his first name is Julien, *not* Julian. Also, his Reddit handle is “zotrik”.

The actual dark web address that is posting this information is http://u3tpz2yv2r6tpkyn.onion/. It is found to be scam anyone reading this message do send this to appropriate authorities for taking necessary actions. Find how to access deep web and for your own safety we recommend you to use a VPN.