You are here: Home / Red Room / What is Red Room in the Deep Web? – A Complete Red Room Experience Documentary Guide
Share62
Pin5

Get all the stuff regarding Red Room in the deep web. Several topics are discussed here, you can follow them to gain knowledge. Search for the topics that you came across our site and get them all you want. I guess, you know little about Red Room and further learn Is it illegal to access Red Room? How does the viewer connect to the RedRoom? And the most disturbing story on the deep web? This story is all about Peter Scully’s Red Room.

Is it illegal to access Red Room in the Deep Web? The Red Room Curse – Japanese Urban Legend

The Red Room story is a Japanese internet legend about a pop up which appears on the victim’s computer. The pop-up image shows a red door and a recorded voice asking the victim “Do you like the Red Room”. 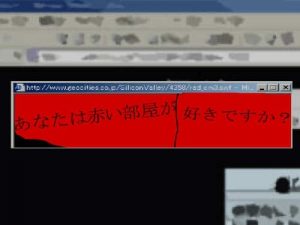 The legend began with a flash animation of a young boy being cursed after encountering the pop-up but gained notoriety when it was found that the school girl who committed the Sasebo slashing in 2004.

On June 2004, an 11-year-old girl murdered her 12-year-old classmate Satomi Mitarai in Sasebo Nagasaki Prefecture, Japan, by slitting her throat with a box cutter whose name has been withheld by most media outlets.

After this murder, it named “Sasebo Slashing“.

The 11-year old admitted murdering that it was done over a comment of calling her a “Goody-Goody” on the internet that she made.

On further investigation, they found that she bookmarked the red room flash animation on her computer. It was the unnerving discovery that leads to the Red Room’s notoriety over the last decade as a truly frightening force.

This is the original flash video that started the legend.

How does the Viewer connect to the Red Room?

By this,  the fate of that women shall be decided by the Red Room members.

It is not illegal to be into Red Room, but I will not suggest you be there, as with your presence in RR makes it indirectly tailed up with a Public Virtual Crime. Red Room probably got its name from a Japanese Video Game I guess.

Peter Gerard Scully (born January 13, 1963) is an Australian who is, as of September 2016, on trial in the Philippines for numerous crimes, including child molestation, the murder of an 11-year-old Filipina girl, and the torture and sexual abuse of at least eight girls, including an 18-month-old infant.In 2011, Scully fled from Melbourne, Australia, to the Philippines after being accused of multiple frauds.

In 2011, Scully fled from Melbourne, Australia, to the Philippines after being accused of multiple fraud offenses. From the Philippine Island of Mindanao, he is alleged to have run an international pedophile ring and offered pay-per-view video streams of children being tortured and sexually abused on the deep web including a video titled Daisy’s Destruction.

On February 20, 2015, Scully was arrested in his rented house in Malaybalay City after investigators discovered the remains of a teenage girl, Rosie, buried under an apartment he had rented. He allegedly strangled her to death according to police who were led to the apartment by Scully’s partner, a 17-year-old Filipino girl, who was also his girlfriend and a prior victim of his abuse.

Margaret Akullo, then Project Coordinator for the United Nations Office on Drugs and Crime and an expert on child abuse investigations, described the case as “horrific” and the worst she had ever heard of.