You are here: Home / Deep web / Is it illegal to surf/browse the deep web?
Share105
Pin4

Just for clarification, the term “deep web” technically just means sites that aren’t listed by major search engines, like Google, Bing, Yahoo, and DuckDuckGo. What people have in mind when they think of the scary sites is the “dark web.” These are sites built on top of darknet: overlay networks which use the public Internet but require specific software, permissions, or configurations to access.

It is not illegal to just “browse” the dark web alone, in theory, unless you are watching at sites that host prohibited content such as . If you do it frequently, then it is.

There are also many websites that sell drugs, guns, and stolen goods, but even if you are on such a site, just browsing it is not illegal. Buying something from it, on the other hand, is because you are either intentionally receiving stolen property, or purposely purchasing illegal goods.

Not everything found on the so-called “deep web“ is illegal. Some of the sites are simply communities of people who wish to remain anonymous. For example, I came across a site called the Dark Web Social Network. In theory, it is just a social network like Twitter or Facebook; however, it is possible that some of what’s discussed on that network are illegal or clandestine in nature.

It does also depend on upon which country you are accessing the dark web from, of course. In the U.S., for, e.g., there are far fewer restrictions on what websites you can visit than, say, North Korea. In a country with a more intrusive government, you would want to be more careful about which websites you visit.

Many websites have been “shut down” by federal agencies in the U.S. (e.g. FBI, ICE, DEA). I think many of them were allegedly involved in trafficking narcotics and guns. Whether or not it is forbidden to browse those sites merely, I am not certain. However, it makes a major difference if you purchase something from one of these markets, or if you are one of the site’s webmasters. 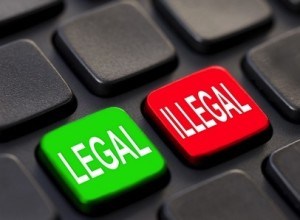 It is not illegal to browse the deep web by itself. It depends on what sites you are accessing, and also what you are viewing and purchasing from them. If you are unknown with this part of the internet, I would suggest starting with some sites like the Hidden Wiki, which have lists of links, and also sometimes explain what the links lead to.

Moreover, secondly, if you are not sure what a link leads to, you may want to bypass unlabeled .onion links, because some of the elements can be highly disturbing.